Around 1217, the Skene family began construction of the central tower of the Skene Castle west of Aberdeen near the village of Lyne of Skene.  The tower was originally constructed as three arches or stories.  For security purposes, the entrance was located on the second level and was accessed with a ladder which could be pulled inside in case of an attack.  The walls were 10ft thick and the structure was covered by a mound of earth.  This structure is believed to have been the first stone and lime constructed building in the district called Mar.

In 1680, Jean Burnett, Lady Skene, began renovating the tower by adding roofing and flooring allowing the structure to become known as Skene House.  A south wing was added in 1745 and the entire house underwent another remodelling between 1847 and 1850.

Skene House was purchased by the Hamilton family in 1905.  Lady Hamilton passed away in 1985 and the trustees of her estate sold the house in 1995.  The current owner is Dr Nicolas Rennie. 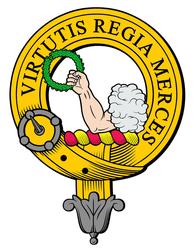 The Skene crest depicts a right arm issuing from a shoulder emerging from a cloud, holding in the hand a triumphal crown.

In regards to heraldry symbols, the arm represents an industrious people, someone who believes in hard work.  The clouds represent mystery and the laurel crown represents glory and victory.

The motto “Virtutis Regia Merces” that is written on the crest translates to “A Palace the Reward of Bravery”. 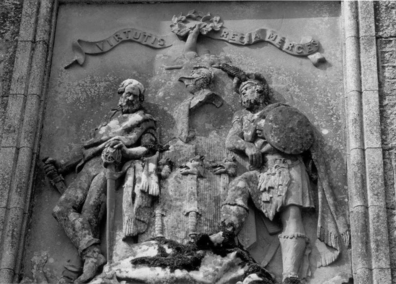 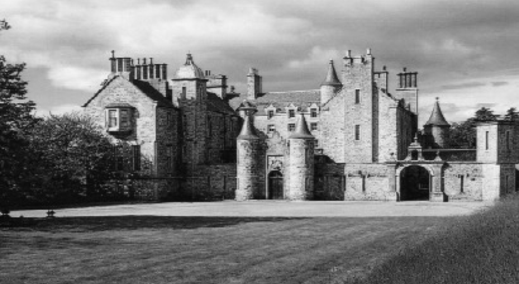 Skene is a name from the Northeast of Scotland.  Most who carry the name probably share a common ancestry, but the name may have passed in early days to others associated with Skene leaders or landlords.

“Skene”, often spelled in different ways, is the same word as “sgian”, the Gaelic word for a dagger or knife.  Similarities can be seen in the Arabic translation, “sikina”, and in the Hebrew translation, “sakeen”.

So, why is the family called “dagger”?  The place called Skene, still a parish today, probably carried the name before there were people “de skene” which means “of Skene”.  The dagger may have symbolized the dedication of the church to John the Baptist, whose head was cut off with one.